The composer and conductor John Rutter, who is also a Choral Hub Advisory Board member, talks to us about his career in music.

For singers, the composer and conductor John Rutter is closely associated with Christmas. His early work includes many much loved Christmas carols and he co-edited four volumes of Carols for Choirs with Sir David Willcocks. He appears regularly in several countries as a guest conductor and choral ambassador and was awarded a CBE for services to music in 2007. John also sits on Biiah’s Advisory Board. What better time to talk to him about all things singing!

Q: How is singing a part of your life?

At nursery school, each day started with an assembly that included singing. I wasn’t good at sport, but singing together, being surrounded by others doing the same thing, it felt like the same type of team spirit. I was contributing as part of a team. It’s an experience that all children should have.

At my school in North London, the headmaster wanted every pupil to be able to sight sing, we all had to learn to read music. Many of my school contemporaries went on to be professional musicians, but those who didn’t are very supportive of amateur music – choir directors, running a local concert club, patrons of the opera, brass bands. I feel very lucky as I didn’t really get my music from home but had no doubt that this is what I wanted to do.

Q:  What changes have you seen in singing during your career?

In 1975 I was invited to be Director of Music at my old college [Clare College] at Cambridge. I really took to conducting during this time – orchestras and choirs. Mixed choirs were becoming more common at this time. Clare had a mixed intake for the first time in 1972 [1] and was one of the first colleges at Cambridge University to have a mixed choir. Not everyone approved of women singing top lines, it was an exciting time to be running the choir, to serve as a role model for other choirs.

The standard of choir singing has skyrocketed during my lifetime. When I was growing up there were only a few flagship choirs. Now amateur choirs often have the same proficiency as professional choirs – the choir has become an expert instrument with a wide range of ensembles and genres, across many countries. Recording has made a big difference, Sir David Willcocks [2] was instrumental in this, using recordings and broadcasts to share performances from Kings College Choir from the 1960s. This had a huge influence, not just in the UK but internationally.

Q: What do you think are the biggest challenges and opportunities for choirs?

There are still great challenges. I want to see more young people getting involved – choirs that cross generations. Whilst choral music, in general, is blooming – choral singing has fallen behind in our school curriculum. We can see the effect as the numbers of children taking music GCSE are dropping. I am concerned that choral music will become something that is just for the elite and this will undermine the opportunity for children to make music part of their professional life. Choir Directors, in schools and church, were often instrumental in starting children on their musical journey. Many of my contemporaries were encouraged in this way. I worry that we have lost the opportunity to enlighten and transform the lives of lots of people through singing as part of school music education. So much research has shown that children who are exposed to music have better general learning outcomes.

Q: Why were you drawn to being on the Advisory Board for Biiah?

Biiah is wide-ranging, targeting entry-level singers – people who suspect they have a love of singing but are too shy to join a choir or have never tried it, or want to turn from bathroom singers to singers who have the confidence to join a choir, or just learn more about choral music.

Q: How did you stay motivated during the long periods when singing together wasn’t possible due to COVID?

I couldn’t do any live choral music-making from Feb 2020 until October 2020 but I was touched by being asked to record video messages of support, encouragement and positivity by choirs around the world. An art form I never expected to get involved in. I had a video camera permanently set up in my living room! I recorded online drop-in sessions during rehearsals, Q&A sessions and even video messages. The main message has been to just keep singing!

Q: What advice would you give someone who wants to start a career in the music industry?

No one told me that music could be such a precarious way of life, and so competitive. A Ph.D. in the practice of composition wasn’t possible in my day but I still made my way through composition. I was very lucky to be encouraged by Sir David Willcocks [2] and was published from an early age. ‘The Shepherd’s Pipe Carol’ was signed by Oxford University Press whilst I was still an undergraduate. Young composers and performers have to work much harder to make their way now, and be savvy with social media, self-promotion, reaching an audience, looking for opportunities.

Q: If you had to listen to one song for the rest of your life, what would it be and why?

Anything by Bach, it’s inexhaustible. Maybe ‘The Art of Fugue’, which he never finished. I could listen to it over and over again and hear something different every time. Perhaps when I have listened to it as much as I can, I can be inspired to complete it in his style! It isn’t his most ‘fun’ piece but he was probing the last secrets of counterpoint and composition. There’s still more beyond – he wanted to find it before he died.

Learn to sing with the free app ‘Biiah’ being developed by Biiah. Sign up to the Biiah waitlist here 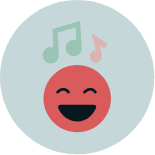